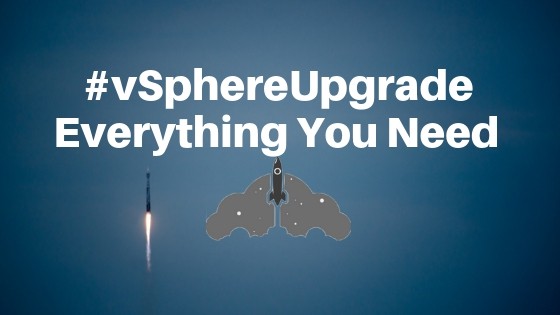 Read on to learn more about VMware vSphere Update Manager, and the vSphere Upgrade process.

What is VMware vSphere Update Manager?

It is extremely easy to use, and allows you to schedule your vSphere updates as you see fit.  One nice feature when it comes to updating ESXi is the ability to stage your updates ahead of time to make the update process faster.  vSphere Update manager downloads everything you need, so your new software is there waiting when it is time to perform the vSphere upgrade.

What Should I Consider Before Starting My vSphere Upgrade With VMware Update Manager?

First and foremost, before you even think about upgrading any VMware vSphere component, your first stop should be the VMware Compatibility Guide.  You may also hear this referred to as the VMware Comparability Matrix or VMware Interoperability Matrix.  This guide tells you what works with your desired version of VMware vSphere.  It is important to check this guide for every component of your environment such as:

You will need to verify the versions of any component that touches your VMware vSphere environment.  Do not proceed with any portion of your vSphere upgrade before doing so, or you may end up in an unsupported configuration.  Think of the VMware Compatibility guide as your one stop shop for making sure your version of VMware vSphere works with 3rd party components – those software and components not created by VMware directly.

One important consideration is your VMware vSphere upgrade path, or how do you get to the version of vSphere you want from the current vSphere version you are running?  The VMware Interoperability Matrix is what can help you determine this.

This is an example of what the VMware vSphere Hypervisor, AKA ESXi upgrade path looks like.  Be sure to always check the VMware Interoperability Matrix before each and every upgrade, as things may change over time as new versions of software are released.

First, I accessed the VMware Interoperability Matrix and clicked on Upgrade Path.  Then I selected the component I wanted to upgrade, and accessed the results.  In this case, I selected VMware vSphere Hypervisor (ESXi). 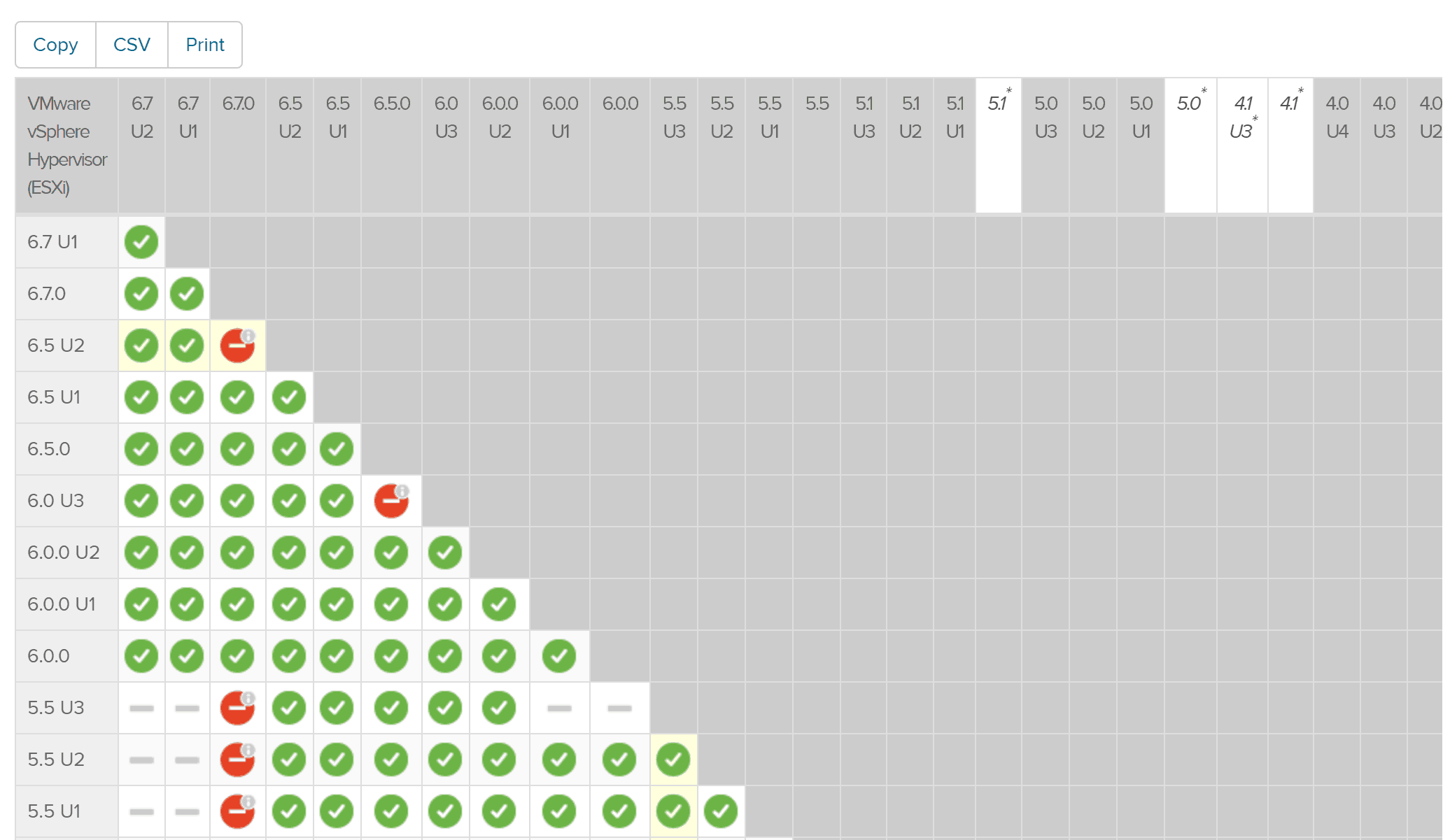 As you can see from this chart, it is easy to see what versions of ESXi I can upgrade from and to.

I can also Copy, Print, or export this data to CSV for later.

vCenter server upgrades are not very difficult, and there are a couple of ways to do them.  You will not use vSphere Update Manager to upgrade vCenter, however.  Be sure to check out this detailed guide on how to update vCenter Server to get comfortable with the process before you do it.

When it comes to updating ESXi, vSphere Update Manager is hands down the easiest way to accomplish this.  It is a powerful tool that is very easy to use, and has been around for quite some time.  As of vSphere 6.5, Update Manager in included as part of the vCenter Server Appliance.

While Update Manager was part of the vCenter Server Appliance, it was not until vSphere 6.7 U1 that it had full feature parity in the HTML5 based vSphere Client.

I have written a number of guides on how to upgrade ESXi using VMware Update Manager:

Besides upgrading to a new ESXi version, vSphere update manager is also helpful for patching ESXi.  Patching ESXi is a very important aspect of handling security in your VMware vSphere environment. If a vulnerability is released, you may need to patch your ESXi hosts.

Here is a detailed step by step guide on how to patch VMware vSphere ESXi with vSphere Update Manager.

You can see more of my VMware vSphere Security resources here.

Likewise, VMware also introduces new Virtual Machine Hardware Compatibility (or virtual hardware as we called it in the old days) with major ESXi releases.  This component can also be updated by vSphere Update Manager.  Updating your Virtual Machine Hardware Compatibility is just like physically upgrading a hardware device.  VMware cautions against doing this upgrade unless it is required.  This update does require a reboot of the guest OS, however Update Manager provides the ability to schedule the update the next time the virtual machine restarts.

I have written a detailed walk through of updating both VMware tools and Virtual Machine Hardware Compatibility to help you understand the process before you try it.

Because both of these components are so tightly tied to the underlying version of the ESXi hypervisor, you would only update VMware tools or update Virtual Machine Hardware Compatibility after your ESXi update is complete.

There are several different types of vSphere licenses.

By offering these licencing models, VMware makes sure there is a version of VMware vSphere that meets the requirements of every IT environment.

Before you start using VMware vSphere Update Manager, it is important to do a couple of things:

Then you can begin to use VMware vSphere Update Manager to complete your vSphere upgrade!