In the last several months I’ve been spending quite a bit of time with Veeam Availability Suite (that’s Backup & Replication plus Veeam ONE by the way) v11’s shiniest (to me) feature.  I’m talking about Veeam’s Continuous Data Protection, also lovingly known as Veeam CDP.

If you haven’t heard about it, Veeam CDP is minimizing data loss.  We’re talking about RPOs measured in seconds.

Like I said, I have spent a fair amount of time with CDP.  I’m talking from configuring CDP many times over to reading the logs type of time with it (which are by the way, full of super interesting stuff if you were wondering), and I’ve learned quite a bit.

Here are my 7 favorite things about Veeam CDP

Veeam CDP is simple to set up, especially when you consider its purpose, which is virtually eliminating data loss.

It really breaks down into a few simple steps:

That’s seriously it, and it is all done from the Veeam Backup & Replication console.  The first time I set it up, I started with building a Linux VM to protect.  By the time I was ready to create my policy, the VM wasn’t even done installing yet.

There is of course, some more official guidance around this, and important things to consider when deploying your CDP environment.  Be sure to check out the official documentation.

2.  It is almost always DNS if it is not

If for some reason you’re having an issue getting CDP going, it is probably around one of two things:

If you’re having issues with either of these things, chances are there’s something amiss with your DNS configuration.  When installing the filter driver, Backup & Replication will basically tell you that’s your problem.

I also had an issue where my initial sync just wouldn’t finish, and I figured out it was yet again DNS by taking a look at the logs.

3.  It pretty much just works

After the ridiculously easy setup, it pretty much just works.

A CDP Policy is configured almost identically to a regular Veeam replica job.  That’s the great thing about Veeam Backup & Replication, if you’ve set up one type of job you’re pretty much good to go on any of them.

There are a couple of gotchas here.  Well, one big one.

When you set up your CDP policy, you’ll set up your long term and short term retention windows. 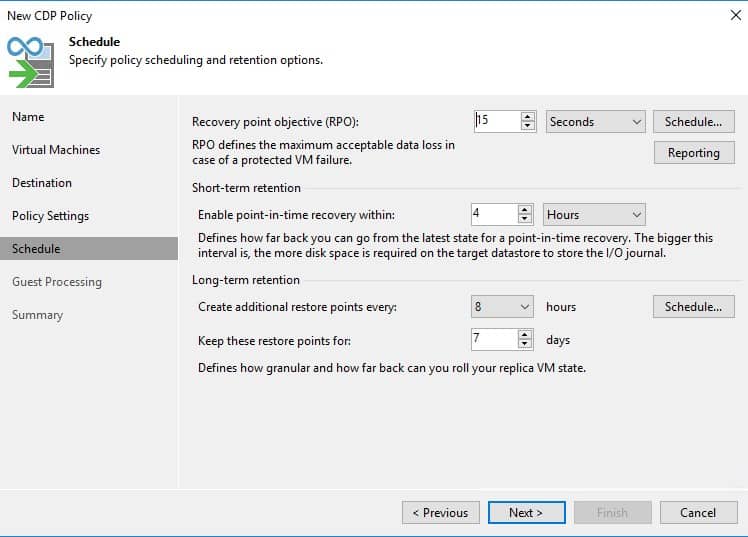 Out of the box, the default is a 15 second RPO stored for a 4 hour interval.

The default for the long term retention points default to every 8 hours and retained for 7 days.  This can add up quickly.

You need storage capacity for this.  Since CDP is designed for your mission critical apps (and some of these maybe a bit active and chatty since they do a lot for work), this is the one area that is easy to get bitten in.

Besides having capacity in space, you’ll also want some I/O capacity.  Veeam CDP will be nice enough to tell you your storage is terrible by telling you where the bottleneck of your Veeam CDP policy is: 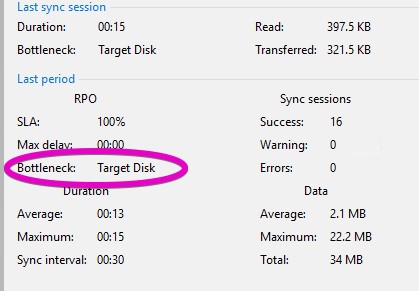 Look we all know I know way too much about storage, but be sure you’re treating that mission critical app like a mission critical citizen by sending it to a high performing disaster recovery site.  Now is not the time to roll out the 5 year old vSphere hosts full of SATA disks (though let’s be honest in this case, CDP will probably work better than the actual application when you start it up).

The other thing to remember is that you need to actually have vSphere CPU and Memory to capacity to run the replicas when it is time to bring them online.  Sometimes people forget this.  Be sure to keep an eye on those recovery resources too!

Don’t worry, there’s actually a pretty simple solution for this problem.  Read on to find out more.

I am happy to say I finally achieved an SLA of NOPE with Veeam CDP.  I have literally the worst setup ever configured in a lab, and have simply ignored all of the best practices.  Don’t try this in production, kids!

This setup is so horrible, anyone who knew anything about CDP would literally laugh in my face.

Yet the technology still prevails.  I nail 15 second RPOs regularly with this terrible setup, but then I got greedy and decided to protect a Veeam ONE server with a CDP policy.

You, know, Veaam ONE, that is constantly monitoring your environment and collecting data.  Kind of busy, kind of collects lots of stuff.  Kind of a lot of data to sync.

5.  You will be surprised how low your RPO can go

Speaking of our SLA of NOPE, I’m quite surprised at the fact that I can pretty regularly nail a 15 second RPO with my terrible, horrible lab setup.

At first, I was looking at it wondering why things were so, well, slow.  The speeds looked pretty horrible when I looked at the running CDP policy. 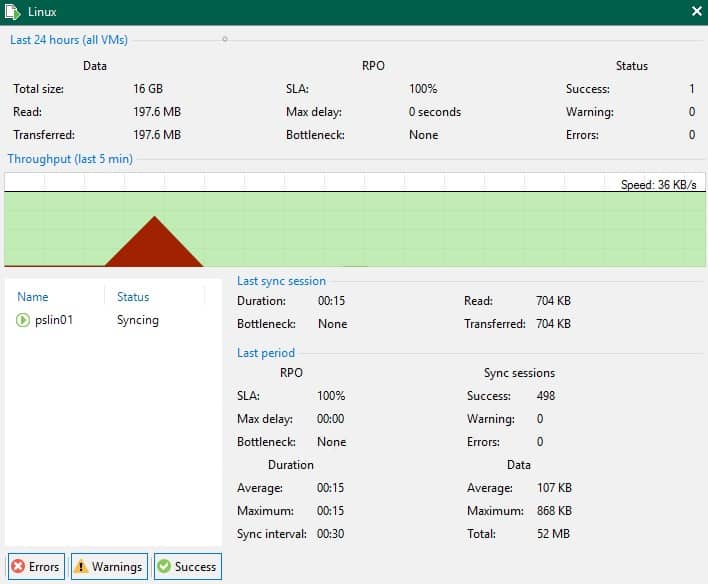 Then I realized it didn’t really matter, because my RPO and SLA were both being met.  Granted this is just a server sitting there doing not much at all, so there isn’t a huge change rate.

Veeam CDP is also smart enough to use the spends it needs to achieve the desired outcome.  It’s not flooding my 10 gig pipe because well, it just doesn’t need to, nor does it have to in this case.

You will also need network capacity for Veeam CDP, so that is an area to pay attention to as well.  Even in Melissa’s Terrible Horrible Gluten Free Lab, I haven’t actually ever seen the network be an issue.

6.  You can use Orchestrator to make it even cooler

You had to know this one was coming.  I wrote all about Veeam disaster recovery orchestrator v4 when it released, but you add all sorts of fun stuff on top of Veeam CDP like dynamically generated dr documentation, and out of the box app verification.  You can even add your own custom scripts to make sure your VMs are up to snuff in their new location.

The readiness check is super nice looking (you can have it e-mail it automatically to your app owners and CTO and you’ll look like a superstar), and clearly lets you know if you’re meeting your RPO and SLA in CDP land.

These plans are super easy to create too, and leverage the CDP policies you have already set up in Veeam Backup & Replication

Here’s my demo of setting everything up in Orchestrator v4

7.  You can keep an eye on things in Veeam ONE

Okay, this is kind of cheating too, but you can keep an eye on your CDP polices inside of Veeam one.  There’s an out of the box SLA alarm that triggers every once in a while in my terrible lab, and there are also a number of reports that focus on CDP. 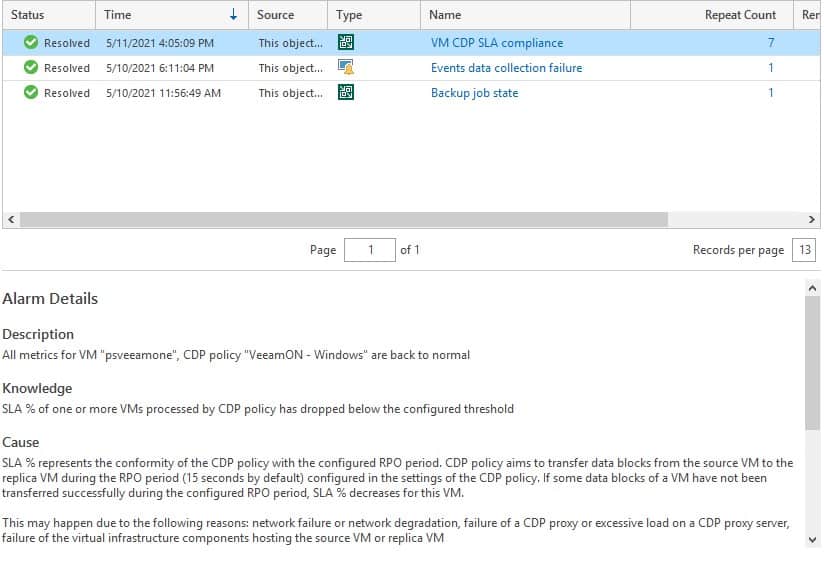 Remember how I mentioned its easy to burn yourself with storage and Veeam CDP?  Luckily Veeam one has you covered there too.

Here’s a list of Veeam ONE reports you can get from the Veeam ONE Web Client that you may find useful getting ready for CDP.

You can also poke around in the amazing new Veeam ONE v11 client and take a look at the performance data from your hosts and VMs.  Pay special attention to the network of your hosts, because you can pretty much see CDP replication running when you know what to look for.

7 Reasons Why Veeam CDP is Awesome

These are just my 7 favorite things about Veeam CDP.  I could actually keep coming up with more, but this is already getting to be a bit on the lengthy side.

If you don’t believe me, download a 30 day free trial of Veeam Disaster Recovery Orchestrator and kick the tires yourself.

Yes, you read that right.  Orchestrator also includes a full version of Veeam Backup & Replication, and a lighter version of Veeam ONE that is perfect to monitor your CDP SLAs with.  That means you can kick the tires on all three of these awesome products with a single VM.  This is perfect for your lab.

When you try it out, you can see how simple and powerful this technology really is.

It becomes easy to protect your VMs with Backup & Replication, detect issues with that protection using Veeam ONE, then recover with one click (and full documentation) with Orchestrator.

Remember, this all applies not only Veeam CDP, but Veeam backups, regular Veeam replicas, and even some storage snapshots.