Reducing risk for a vSphere upgrade is top of mind for all VMware administrators, especially as popular vSphere versions such as vSphere 5.5 and ESXi 5.5 reach their end of support dates.  In VMware vSphere 6.7, VMware Update Manager became even more accessible.  As a bit of a history lesson, it was only vSphere 6.5 that it became integrated into the vCenter Server Appliance.  Now, it will be in the VMware HTM5 vSphere Client, in addition to the web client.

Now, let’s take a look at the new vSphere 6.7 HTML5 client, and vSphere Update Manager in vSphere 6.7.  Then, we will also talk about the vSphere client capabilities enhanced in the latest vSphere version, vSphere 6.7 U1.

vSphere administrators and operators have begun to move away from the vSphere Web Client in favor of the newer, shiner, and of course faster VMware vSphere Client 6.7 which is built using HTML5.  The same goes for the ESXi 6.7 web client when it comes to managing individual hosts.

Since vSphere Update Manager can make host upgrades so much easier for users, many were hesitant to switch to the VMware vSphere HTML5 Client until they could upgrade ESXi using vCenter’s Update Manager from the VMware vSphere Client. I can’t say I blame them. While upgrading ESXi is not an every day occurrence, ESXi upgrades are often crucial to a VMware environment when they do, in fact need to happen.

The VMware vSphere 6.7 client using HTML5 is easy to adapt to.  The interface is very intuitive, and it loads very quickly.  The best part is not having to worry about flash!

Note:  The proper way to refer to the vSphere 6.7 HTML5 client is now simply the VMware vSphere Client.  Since this term has a tendency to be used for well, any vSphere client.  If you need more clarity, you can call it the VMware vSphere Client 6.7.  The pervious flash based client remains known as the vSphere Web Client.  This can be a little confusing since both clients are accessed from the web, but as we know sometimes it takes time to adopt new nomenclature.  Sometimes I still catch myself calling vCenter Virtual Center! 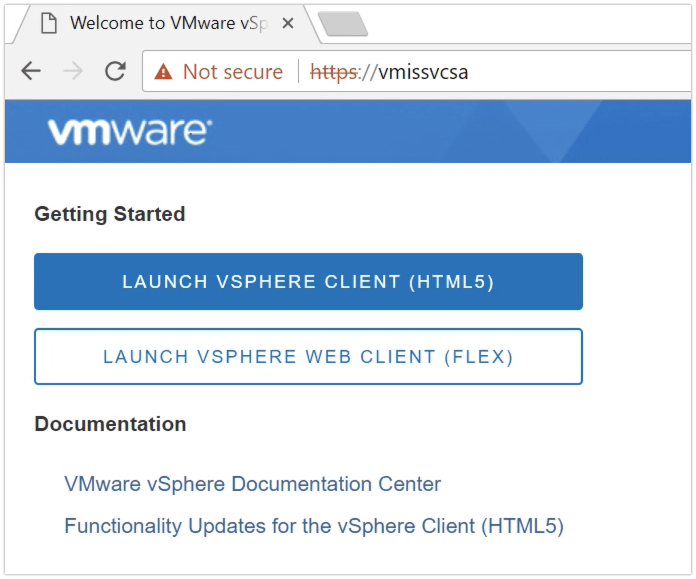 vSphere Update Manager in vSphere 6.7 and vCenter 6.7, Accessible With the vSphere Client

In vSphere 6.7, ESXi host upgrades using vSphere Update Manager will now be possible. Administrators will now be able to use the streamlined vSphere 6.7 HTML5 Client to accomplish this very important task. Since this is vCenter 6.7 Update Manager’s first appearance in this interface, some functionallty will remain in the vSphere Web Client.

There are some great resources available from VMware to get a quick overview of what is new in vSphere 6.7:

Additionally, the blogging engines are running around the internet!  I will list great vSphere 6.7 posts here as I come across them:

Besides vSphere Update Manager becoming available in the vSphere Client, there have been even more features and functionality added to the HTML5 interface, such as the ability to manage vSAN and NSX.  These three features were a critical barrier to adoption for the vSphere HTML5 client until now.  The same goes for the ESXi 6.7 web client, which has come a long way with this vSphere 6.7 release.

Feature Parity For The New HTML5 VMware vSphere Client 6.7 U1

If you are running any of the following vSphere versions, you can upgrade directly to vSphere 6.7 U1

Read on to find out how to upgrade from vSphere versions, such as vSphere 5.5.

New Features Added to the vSphere Client in vSphere 6.7 U2

In addition to complete feature parity, the vSphere Client in vSphere 6.7 U2 also contains some additional features.  Most notably, the introduction of the Developer Center.  The developer center has to main features:

These new vSphere Client features are all about developers.  Be sure to read more about the features added to vSphere 6.7 U2 in this article.

It is important to not that you will not be able to upgrade directly from ESXi 5.5 to ESXi 6.7.  If you are running ESXi 5.5, you should first upgrade to ESXi 6.5, and then to ESXi 6.7.  Remember – vCenter must always be upgraded first!

If you are starting to plan an ESXi upgrade, take a look at the session Rebecca Fitzhugh and I presented at VMworld 2017 called Upgrading to vSphere 6.5 the VCDX way.  You can also find out how to upgrade ESXi 5.5 to 6.5 using vSphere Update Manager with this walkthrough.

Before even contemplating a vSphere Upgrade, it is very important to make sure all software and hardware components are compatible with the version of vSphere you plan on upgrading to.  Beyond your vSphere hosts, this also includes things like your storage array!  If you need a better understanding of the, VMware Compatibility Guide, this guide has everything you need.

The Evolution of vSphere Management, the vSphere Client

If you have been around VMware products as long as I have, it is clear to see that vSphere management has become easier and easier with every release.  Like most other software vendors, it does take time to adopt a new client, as we saw with the introduction of the vSphere Web Client and now the vSphere Client.  However, when VMware finishes their client implementations, nothing can beat how much easier vSphere management becomes.