At VMworld this year, there was a great deal of talk about VMware and containers.  This, of course makes a lot of sense, especially when you look at the parallels between virtual machines and containers.  While there are some differences, many of the concepts are the same, and some may even consider containers to be evolution of the virtual machines we’re so used to.  On December 5, VMware announced even more integration with containers, including Docker and Kubernetes.  For enhanced management, there’s also integrations with Mesosphere and Pivotal Cloud Foundry.  These integrations allow easy deployment of containers into vSphere, vCloud Air, and Fusion environments.

Cardboard Boxes and Treasure Chests
A container, or a virtual machine isn’t much without the rest of the environment it lives in.  This environment also needs ability to manage and orchestrate it.  Kubernetes by Google adds enhanced management capabilities for managing applications across various hosts.  Kubernetes starts by creating a cluster of resources on top of physical hardware to run containers on top of.  Containers are deployed in Pods, which are a group of Docker containers with shared volumes. Pods are also used as a basis for deployment, replication (to ensure containers are running on multiple pieces of hardware) and scaling.  We’re beginning to see containers, and the world around them gain new personality traits and new features as they continue to grow up into the environment they will ultimately support.

One of the things that is often talked about in virtualization and abstraction is overhead.  Whether it be Docker or ESXi, there’s something installed on our hardware that enables these technologies.  Enter VMware’s performance team.  They bench marked a number of configurations, a Linux OS running directly on hardware, vSphere hosting the Linux OS, Docker running the workload, and finally, Docker running in a guest virtual machine on vSphere.  Their results were astounding, with vSphere and Docker working together with less that 5 percent overhead.  This kind of integration doesn’t happen over night, and is a testament to VMware’s commitment to the rise of the container. 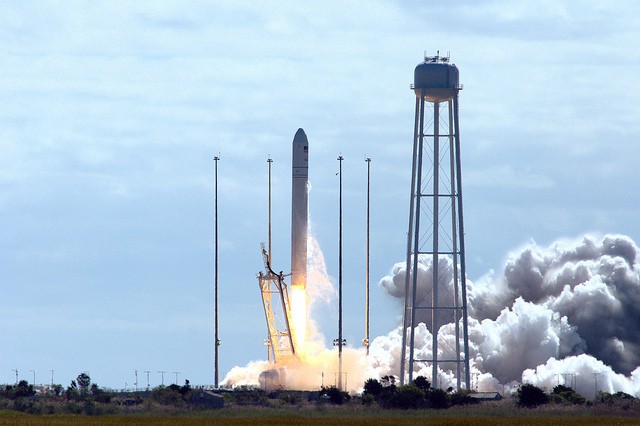 (Antares launching the Cygnus cargo ship to the ISS, picture by Daniel J. Grinkevich of grink.com)

Cargo Ships for Earth and Space
Mesosphere seeks to streamline your virtual and physical machines, whether they be in your data center or in the cloud into a single pool of resources.  Built on open source technology, Mesosphere lets you run your assets wherever you need them, and manage them from a single interface.  Pivotal Cloud Foundry is all about simplifying these deployments to the cloud, and enabling automation and orchestration, so that developers can remain focused on their applications, without worrying about the infrastructure beneath them.  It is easy to see how all of these technologies can work together, enabling our journey to the cloud and the rise of our Software Defined Data Centers.  It is no secret that VMware holds the number one spot as a virtualization platform, and it makes sense for them to begin to work with the broader ecosystem to deliver the flexibility containers can contribute to their customers.

While things may not be moving as fast as a rocket, the shift in the industry is definitely happening.  Companies are embracing new methods and methodologies to build and deploy applications.  Using technologies like Docker, OpenStack, and applying DevOps methods, application containers will drive the adoption further and faster.  We aren’t all Google and Netflix, but we are seeing a long term view that looks very much like clouds and containers are becoming a part of every data center.  VMware is enabling and validating the shift by adding integration into these technologies.  Whether you’re looking at containers now or not, the ship will arrive at your dock before you know it.  Now is a good time to start the journey, and VMware is proving that out by their choices too.