Do you like learning about all things VMware? Ever find yourself with that weird type of downtime where you don’t necessarily have anything to do, but don’t want to resort to just surfing around the internet? Your answer may be VMware’s CloudCred.

#CloudCred, which can be found at CloudCredibility.com lets you do VMware related tasks for points, which you can then redeem for all sorts of goodies. There’s lots of your typical vendor swag like shirts and mugs, but CloudCred also often runs all sorts of promotions and contests where they give away other cool things. Right now there’s one for a GoPro!

The tasks themselves vary greatly. Some want you to read a white paper or video, and some what you to take a trip over to VMware’s Hands On Labs. Whatever the task is, there’s a good chance you may learn something new, especially if you purposely target a topic you don’t know much about.

There may be some tasks you just aren’t interested in, which there’s nothing wrong with. There’s so many that you can pick and choose and find virtually anything to suit your fancy when you have a few minutes free.

Today, I felt like learning something, so I headed over to the learning tasks section. Right off the bat, I found something that looked interesting. Task 2756: Take Advantage of KBTV. 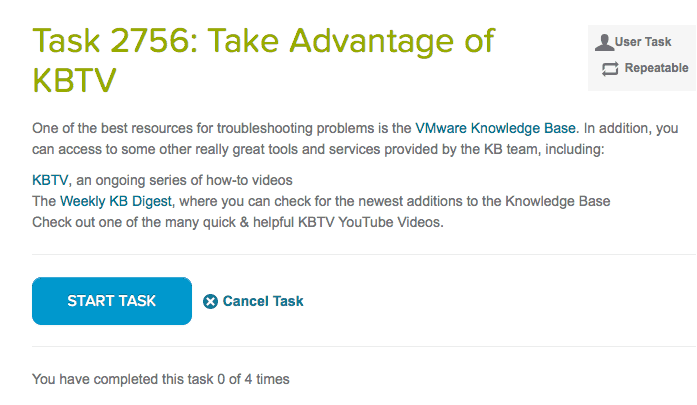 This may be potentially embarrassing to admit, but before today, I didn’t even know KBTV existed! I can even do this particular test up to four times. Once I clicked start task, I got a link to VMware KB’s YouTube channel https://www.youtube.com/user/VMwareKB, and a spot to enter which KBTV video I watched. I chose How to setup mirrored folders for your Mac and Fusion virtual machine because I still need to set up VMware Fusion on my new MacBook pro, and I always set up mirrored folders. Might as well take the 51 seconds now to figure it out now instead of trying to remember it later. After I enter the name of the video, I’m done and scored myself a cool 50 CloudCred points. 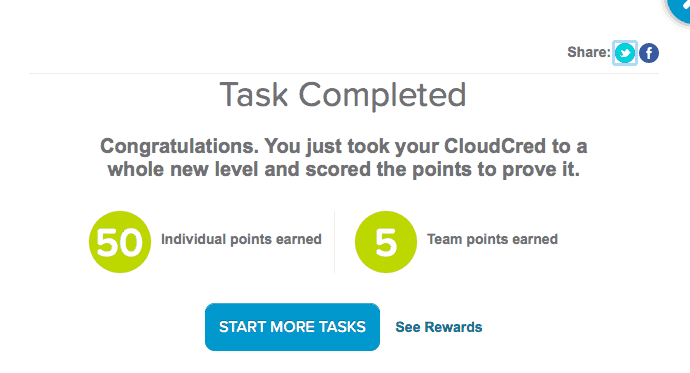 There you have it, a fun way to productively procrastinate, and earn some cool swag. If you’re already signed up for CloudCred, or planning on singing up add me! I’m registered as vMiss33, of course.

Is this site really from VMware?? Cool! I will sign up right now :) Thanks for the tip ;)