This article is a continuation of the series I like to call Fumbling Through PowerCLI. My goal is to provide an overview of learning and using PowerCLI by logically working through how to accomplish common administrative tasks. I also like to demonstrate how we can use features within PowerCLI to teach ourselves, and well, fumble through it.

What if you did not know to use get-vdswitch to find out if you had any distrinbuted virtual switches on your VMware vSphere hosts?  Looking back on our work with standard virtual switches, we know we can find out the PowerCLI commands we will need to use by issuing Get-VICommand *switch, since we know it involves the switch on a vSphere host.

Let’s start by using the command Get-VDSwitch to see if we have any distributed virtual switches in our environment.

In fact, let’s see what switches are connected to each host.  While we are at it, we might as well take a look at host2.lab.local and see what distributed virtual switches it is connected to.

We can remove the distributed virtual switch named LACP2 by issuing the command Remove-VDSwitch -VDSwitch LACP2. PowerCLI will then confirm we want to remove the switch.

Oh no, an error. It looks like ThisistheFinalvSwitch is in use.   As we can see above, it is in use by host2.lab.local. We can also confirm in this by looking at vCenter. 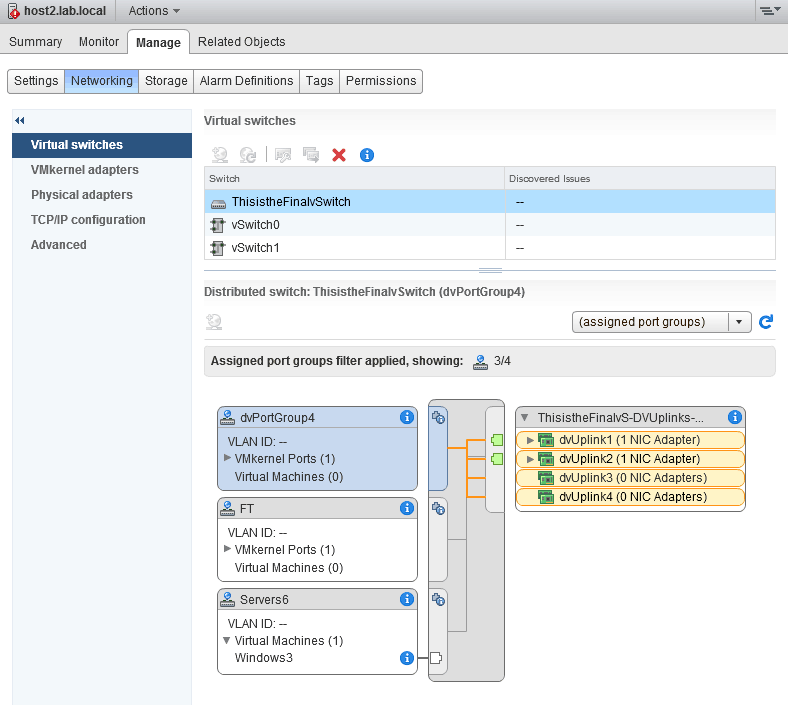 After we disconnect the host from the switch, we can try our PowerCLI command for the distributed virtual switch again.

This time it worked successfully, and it did not ask us for a confirmation before removing the switch.

Now, since we have cleaned things up, we are going to create a new distributed virtual switch. First we will use the command Get-Help New-VDSwitch to find out the syntax and what information we need. 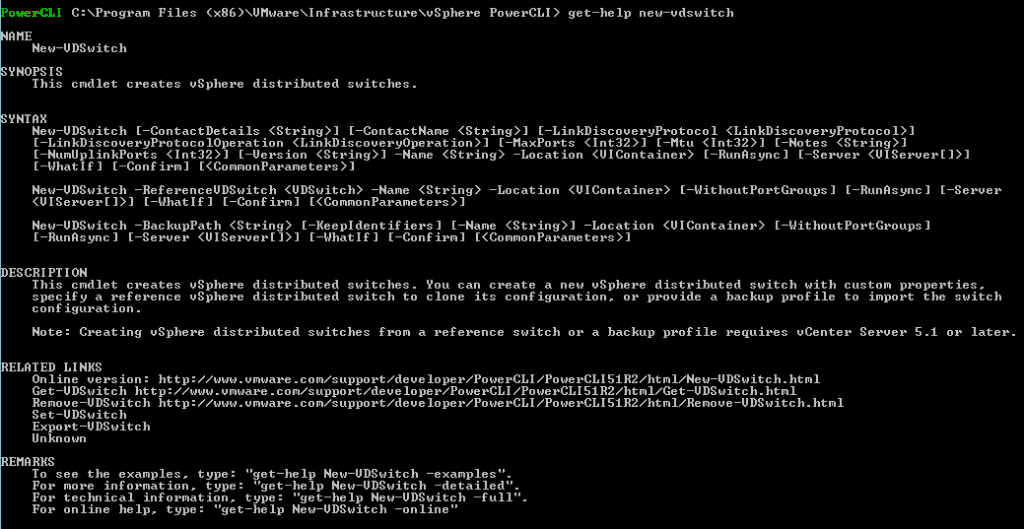 As you can see, there are a number of options and and a number of ways to go about creating the switch. One thing to note is the -ReferenceVDSwitch parameter. This would allow you to create a new switch with the properties of an existing switch.

We are going to keep things simple for our new distributed virtual switch, and create one using the command new-vdswitch -NumUplinkPorts 2 -Name ProductionApp1 -mtu 9000 -Location Lab.

Now we have our switch. Our next steps are to add a host. We can use the command add-vdsswitchvmhost -vdswitch ProductionApp1 -vmhost host2.lab.local

As we can see, this PowerCLI command added a host to the dvswitch.  To verify the host has been added to the dvswitch, we can also use a PowerrCLI command.  The command to do this is our Get-VDSwitch command we discovered earlier.

Some of the next tasks we need to accomplish are adding uplinks and port groups. Stay tuned for the next part of this series to find out how (hint: we’re going to start using variables!).

The big lesson here is the the commands are slightly different when working with vSphere Standard and vSphere Distributed virtual switches.  Luckily, it is easy to fumble through PowerCLI using the built in help features in order to figure out the differences