This year, I became a #CiscoChampion for the first time.  My first exposure to Cisco was of course, way before this.  When I was in high school I took classes at night at a local community college.  After my first Intro to Networking class, I went through the Cisco Networking Academy.  This experience has served me well, as it came in handy when I was interning in college, and having a solid networking foundation has only helped me in infrastructure design. 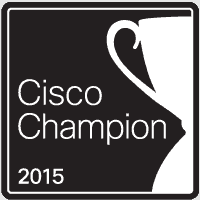 As we all know, while it may have started as a networking company, Cisco has become much more than that!  For my first #CiscoChampion blog, I chose to write about FlexPod, and talk a little bit about what it is, as well as some of the new Cisco Validated Designs and NetApp Verified Architectures that have been released recently.

I called this article FlexPod for the Future, because many of the FlexPod design tenants lend themselves so well to building a scalable policy based infrastructure.