I’m a huge fan of Evernote, but it wasn’t always this way. I didn’t really like it that much when I started using it, and stopped for a good year or so. It wasn’t until I started using it for VirtualDesignMaster, a project that requires a ton of collaboration, that I really started appreciating it. I was totally that person who carried a small notebook with me everywhere back in the days before iPhones, and Evernote became the evolution of that for me.

One of the best parts of Evernote is I can access my notes on whatever device I’m using at the time, and I use it on a lot of devices. I have a MacPro (lab), a MacBook Pro (work), MacBook Air (glorified twitter and web surfing laptop), iPad Mini, and iPhone. I have Evernote on all these devices and I use it seamlessly across them. Yes, that’s a lot of devices, I know.

So what do I use Evernote for? First of all, it quickly became my blog editor of choice. I basically write everything in Evernote so I can switch between devices. I can also throw images into my Evernote. So for example, let’s say I wrote a post with images on my MacPro, later on I can use my MacBook Air to put the post into WordPress. I have a notebook within Evernote for each blog (spoiler alert…), also containing a running list of things I want to blog about. Because I can access Evernote from anything I’m using at the time, It’s super easy to add new ideas on the go.

The second thing I use it for is collaboration. If you have someone you collaborate with on a regular basis, it can be a fantastic tool to keep up on things. I have several shared notebooks, from random articles to share with collaborators, to things you’d like your collaborator to review. It can also be a great place to use as a parking lot for new ideas as they come up. Often, we’ll create notes with a paragraph or two introducing something new, and what we want to accomplish with it.

Another is recipes! I use Evernote to keep track of recipes I’ve found online I really like, and any modifications I may have made to them. This goes beyond a mere bookmark in a web browser, as chances are good I’ve made some substitutions to a recipe due to my food allergies. If I don’t record it someplace, I go to make the recipe again and have trouble remember what I’ve swapped out, or how much of it. This is especially important in baking, when sometimes it takes a few shots to get something just right. I can also leave myself notes on technique, since sometimes gluten free and dairy free recipes can be a little…special.

Finally, back to the notebook I used to carry. Evernote takes the place of this now. In this notebook I would write down goals, ideas for blogs, writing, and projects. Lists of things I wanted to accomplish or read up on, pretty much anything which popped into my head and I didn’t want to forget. I actually like Evernote a little bit more than traditional pen and paper for this, since it is easy to re-format things as they evolve.

While I subscribe to Evernote Premium, I know I am not making the most out of all of its features. 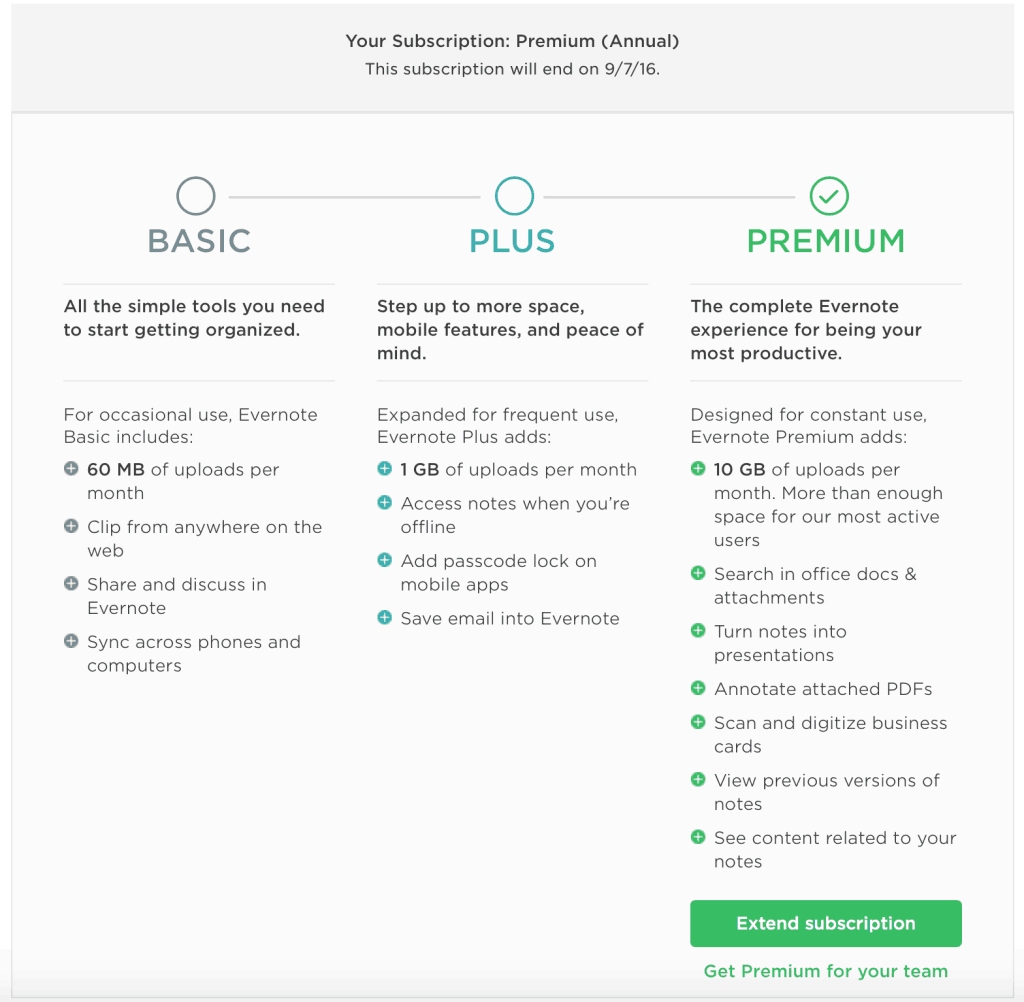 (Comparison of the different levels of Evernote subscription)

Perhaps the handiest feature is the ability to view previous version of notes. If you’re writing something and don’t quite like where it is going, this makes it easy to go back and see what you were originally thinking about. Another one of the things I do use it for is adding attachments, such as PDFs, Word documents or Excel spreadsheets to my notes. This is really hand if I’m researching a subject and want to keep everything in one place. While I do try to keep everything as digital as possible, I’m notorious for having a scratchpad by me. Once a page is full, I can add it to Evernote and categorize it accordingly. There are some things I also just want to draw out with a pencil and paper, these too can easily be added to Evernote.

To find out more about Evernote, don’t forget to check out Evernote.com. They also have something called the Evernote Market, which is full of cool stuff like bags, stands, and my favorite, the Evernote Moleskine Notebook.