When I was still on the customer side, in 2011, I had the pleasure of working with FlexPod for the first time.  It wasn’t in a cool rack that I could pose in front of, it was a NetApp FAS2040, Nexus 5ks, and Cisco UCS Servers and their Fabric Interconnects (which were named Batman and Robin, by the way) spread across a row in our lab.  We had just got a brand spanking new UCS and I was able to create a FlexPod from what I had laying around.  I had the flexibility to integrate this infrastructure on my own, without a huge initial investment. 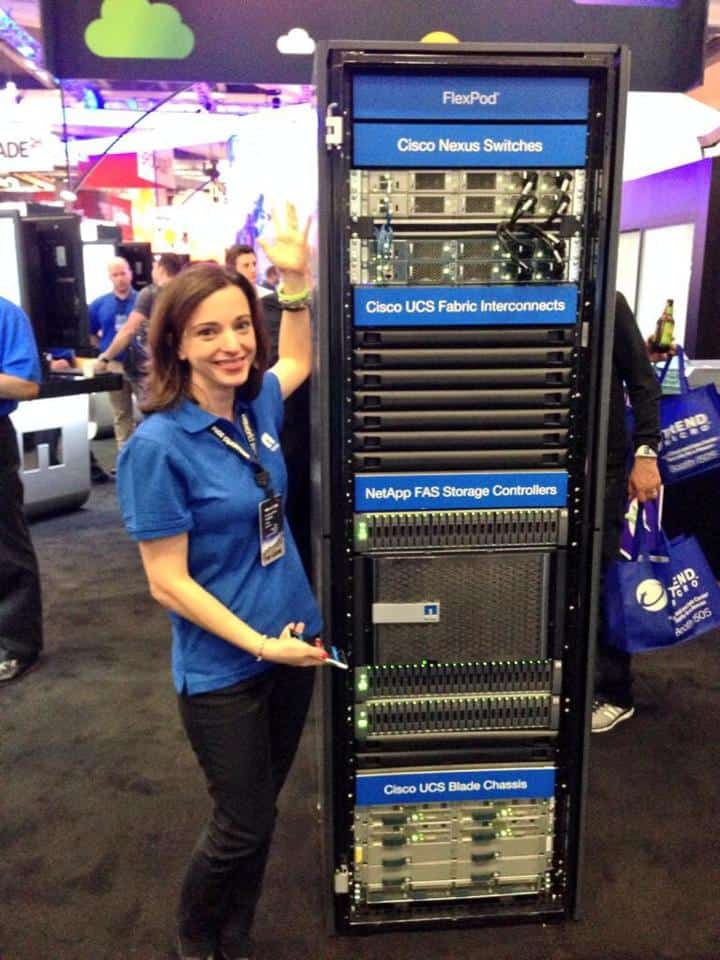 (A FlexPod doesn’t have to look as pretty as this, at VMworld 2014)

My Cisco team was nice enough to come rack the UCS chassis for me, and I had the Fabric Interconnects up and running in about an hour after they left.  The next day I started configuring the UCS, and learned about the glory of service profiles.  By that afternoon, I had the ESXi 5 beta running in my lab (with NFS, of course), and was ready to rock and roll with some VMs.  The next day was Lab Manager.  We also did some View on there.

When I did some firmware updates a couple of weeks later, again, it was simple process.  I could have actually scheduled it to run later, which I thought was an extremely cool feature.  It took next to no time to have everything revved to current levels (the poor UCS sat in the lab neglected for a few months before I got my hands on it).

I think one of the fundamental reasons I was so attracted to UCS, besides the ease of use, of course, was the ability to abstract the personality from the hardware.  I had a dream of running our ESX environment stateless.  With the Service Profiles in UCS, a new blade could be on line in minutes with the personality of an old blade in the event of a hardware failure.  By either using boot from SAN or Auto Deploy, it could be up and running as an ESX host in minutes.  This is another layer of abstraction, similar to what VMware did for Servers, abstracting the server’s personality form the physical hardware.

Another key component of FlexPod is the Cisco Nexus infrastructure.  Personally, I can’t wait to be running VMware over NFS with a nice Nexus 9K and 40 gig Ethernet, but I digress.  The philosophy behind Nexus, any personality on any port, is just another layer of abstraction.  I don’t need separate SAN and Ethernet switches any more, I can use a Nexus and flip personalities in minutes.  I can run ESXi over NFS tomorrow, and be running it over SAN the next day with minimal reconfiguration.  Unified architectures really are a thing of beauty.

Finally, comes the storage.  Cisco Nexus’ NX-OS NetApp FAS’ Data ONTAP both take unified architectures to the next level.  I can run any storage protocol I want on my array, just like I can have any personality I want on my Nexus port.  The use of Storage Virtual Machines in Clustered Data ONTAP once again abstracts logical from physical, by allowing the movement of volumes between any node in the cluster, and providing a single namespace for access.  This can let me do unique things like leverage SAS on one controller, and SATA on another, all from the same logical construct.  I can apply Quality of Service to this container, which can be great if I want to give a development team a pool of storage, and let them do whatever they want to it without having to worry about them impacting production.

I had the time and energy to devote to building my FlexPod in the lab, and was able to use Cisco Validated Designs and NetApp Validated architectures to guide me.  Had that not been the case, I would have had a number of methods to have my FlexPod delivered.  I could have it show up on my dock, ready to plug in and deploy on.  I could have a partner come and integrate it at my site, or, I could have a partner come help me integrated it at my site. Another flex, the delivery I choose.

FlexPod has come a long way since 2011.  There are many designs to choose from, customers across the world, and more than just one flavor of FlexPod.

FlexPod Datacenter is what I would have deployed in 2011.  It has a number of designs, all of which serve to provide the foundation for your software defined and policy based datacenter of the future.  I can pick virtually any hypervisor I want (I could even run multiple hypervisors like VMware vSphere and Microsoft Hyper-V side by side, on the same FlexPod!), and any business application (SharePoint, Oracle, SAP, etc) I need to provide to my users.

FlexPod Select is a more recent development, and more suited for the workloads I need to be high performing, like my big data analytics.  Hadoop reference architectures are again, easily deployed on the platform.  The best part is I manage these components just like I manage my FlexPod Datacenter.

Let’s digress into management for a moment.  Cisco UCS Director (formerly Cloupia) gives me an easy to use interface to manage my FlexPod.  It’s a powerful management and orchestration tool that was designed for just this purpose, to manage my infrastructure stack from top to bottom.  I’ve gotten to use UCS Director for myself, and it does everything it promises.  My favorite part, which may seem silly, is the stacked view feature that allows me to check up on a VM, and which infrastructure component it is touching from the host to the datastore to the switch to the storage controller in one spot.  No more digging through stand alone clients to try to piece together a picture of what a VM really looks like.

Finally, we have FlexPod Express.  This is great for remote offices and small sites.  It utilizes FAS2500s and a few UCS C-Series (rack mount) servers to provide a fully functional infrastructure in a small footprint, that is managed and operated just like the FlexPod in your datacenter, again, with the hypervisors and applications of your choice deployed in a consistent, validated manner.

FlexPod had me at the Fabric Interconnects.  I’m an infrastructure person, and this is an infrastructure that is powerful, consistent, and repeatable.  It is also easy to manage, which let’s us focus on other things, the things that matter.  The datacenter of the future isn’t going to be built on us manually deploying hypervisor hosts and virtual machines.  It isn’t going to be built on us provisioning storage, or even worse, waiting for someone else to provision storage or install the hypervisors for us.  It’s going to be built on our policies and processes that give our business the competitive edge.  Its going to be built on the policies that let our users deploy a development environment from a tablet.  FlexPod gives us the flexibility to do just that, be confident that we’ve deployed our infrastructure for today, and give us the time we need to design our datacenter of tomorrow.  The future is coming, FlexPod helps us get ready for it.